The event, proved to be as captivating as the doors themselves if the feedback generated is anything to go by, with those in attendance lavishing universal praise upon the ‘Private View’; arranged similarly to the opening of an art gallery. 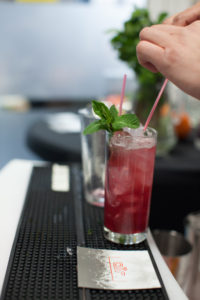 Prior to its hosting, guests received a lovingly crafted presentation box full of aïr marketing collateral and a ‘save the date’ invitation offering them an exclusive opportunity to explore this exciting range first-hand, a request that summoned a significantly positive response.

On the night itself, as well as being shown the 45-second long video featuring mountain-bikers, free runners and an aïr t-shirt clad man somersaulting through the aïr doors, produced by innovative film-makers Capta Media, invitees were treated to nibbles and a special aïr cocktail.

“We were delighted that so many people took time out of their busy schedules to attend.”

Containing an impressive blend of vodka, lime and pomegranate juice, with a fresh taste and in the striking colour of aïr, as prepared by mixologist Thomas Colombo, it went down so well, that we are now running a social media campaign to name the cocktail.

It was standing room only as guests encompassing a host of existing and potential installers and architects took time out of their busy schedules for the premiere. You can watch the high octane video here: www.youtube.com/user/Discoverair.