The creative mastermind behind our recently commissioned aïr promotional video, Joe O’Brien of Capta Media, has given an exclusive insight into its making:

When I was approached to make the film for aïr bi-fold and lift & slide doors I was excited. That might sound an odd thing to say about doors, but it was right up my street. I got to work straight away sorting out my athletes and music. 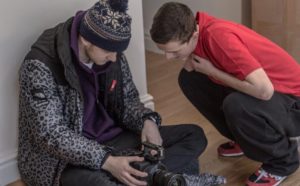 I had been working with Australian producer, A Purple Heart on some recent projects that were highly dependent on music, so I went straight to him to put something together for me and true to form he delivered a great track in just two days!

Next came my athletes. I started by contacting Jesse Jones, the guy who had started my passion for shooting mountain biking, which helped kick start my career. My next athlete was George Burdell, one of my best friends and best freerunners I know. He has been my inspiration in my training and I’ve been filming with him for the past 4 years, so it’s safe to say we work well together.

With music and athletes sorted, we started shooting the extreme sequences, which turned out to be an absolute mission. It just so happens that the time I wanted to shoot was also during some of the worst weather the UK has ever seen. This meant we had to brave the elements for the biking footage and catch a little bit at the Asylum Skate Park in Huthwaite. We then headed to film the free running sequence at one of the first aïr installations in North West London.

Once shot, the basic cut was relatively quick and was edited with George’s input on the way back from London. As soon as the team at aïr were happy with it, I added some funky door transitions and boosted the aïr brand colours and we had a captivating advert!